If the building survives another 50 years then hopefully the original design may be appreciated. 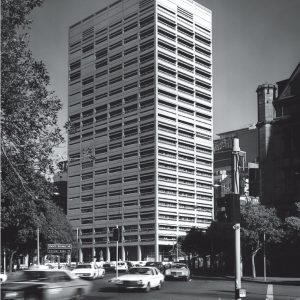 The Law Courts (c.1977) as designed by McConnel Smith and Johnson 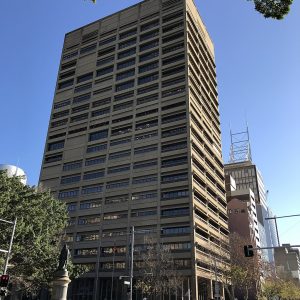 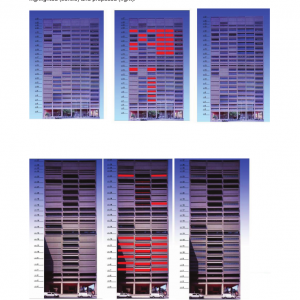 Changes to the Law Courts 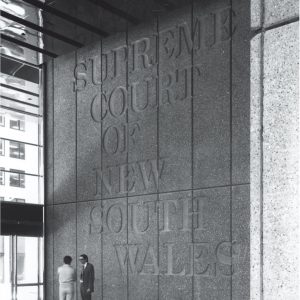 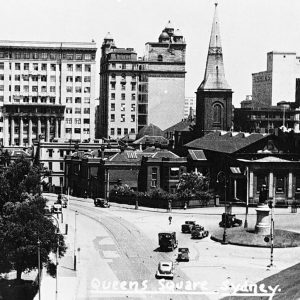 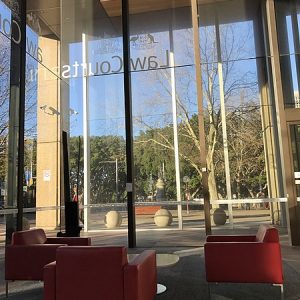 Since its opening in 1977, the Commonwealth & State Law Courts has been an imposing presence on Queens Square.

The 27-storey building was designed by architects McConnel Smith and Johnson (MSJ) to be “dignified and cater for the comfort and convenience of all users”.

As large volumes were required to be accommodated the building was constructed using a steel frame. Some steel beams and columns resulted in being the largest fabricated steel members ever used in a city building. When it was opened it had the largest floor area of any building in Sydney

The facade of the building reflects the internal functions, the pre-cast concrete panel system refined from MSJ’s Metropolitan Water Sewerage and Drainage Board’s Head Office 1965 (demolished). Appropriately, as the building’s functions were more complex than those of a conventional high rise building, so was the innovative and original expression of the façade. It established a language of precast elements assembled in differing configurations reflecting the function behind it. The result was lively and interesting, totally in character with not only the precinct but also the sandstone buildings of Sydney.

Consistent with the philosophy of the building’s original architects, it addressed the issues of sustainability and energy efficiency. It is the recipient of a merit award from the Australian Institute of Architects.

The building is one of a number of distinguished buildings of the period that included the State Government Offices (demolished), The Metropolitan Water Sewerage and Drainage Board’s Head Office  and Australia Square. At the time these buildings, with the exception of Harry Seidler’s work, were the urban manifestations of the “Sydney School” of architecture. Greg Wright writes: “The ‘Sydney School’ espoused the values, referred to as ‘Sydney nuts and berries’, developed partly as a reaction to outside influences such as the international style and was influenced by organic architecture, brutalism and arts and crafts.

It was also concerned with improving the quality of housing for average Australians. In the 50s and 60s there was a group of young Australian architects who were indeed very happy to use the term. Their work was inspired by the ‘organic functionalism’ of Frank Lloyd Wright and together, consciously or unconsciously, their modernist design philosophies can be loosely described as comprising the Sydney School of architecture. The story of how these young architects interpreted Wright’s utopian regionalism by placing them quietly within an Australian context is a remarkable one, not only for the fact that their story has remained such a secret, but also for the fact that for the first time in the modern era there emerged an urban design philosophy that was entirely appropriate for the Australian landscape.”

Law Courts Limited (LCL) is an unlisted public company, limited by guarantee. LCL’s operations are jointly funded by the Commonwealth and NSW Governments through their respective Attorneys-General.

The application also approved changes to 71 bays of the façade.

The City of Sydney Heritage DCP provides controls for development to heritage items, and buildings and sites within heritage conservation areas and heritage streetscapes, and development to properties over 50 years old.

As such the Law Court Building did not need to comply.

It is accepted that all appropriate approvals have been received for the refurbishment of the Law Courts.

Experience tells us that authorities are loath to take on issues that may be subject to lengthy challenges. For example the Rural Bank Building in Martin Place was the subject of a lengthy protest against demolition that was lost. The result now speaks for itself.

The state bank that proposed demolition has itself long since disappeared. The city council has recently approved the demolition of a building that is on its own list of buildings of significance!

The partners of the MSJ, at the time the Law Courts was designed and documented, are now deceased.

The building’s original designer was Geoffrey Atherden who is now more well known as the writer of the much loved television series ”Mother and Son.” He waived his intellectual right to the design as he felt that he was now far removed from the practice of Architecture. The principals of the documentation team, now partners of an offshoot practice of MSJ gave approval for the changes to the façade. I understand that at least one of these architects has reservations about the emerging result.

As work on the façade progressed I became progressively more alarmed. I wrote to Law Court Limited and to the architects expressing my concerns, as I believe that the authenticity of the building was being destroyed.

In reply to my letter, the current project architect responded by stating that “The proposed amendments to the façade were determined by the new developing philosophy of Justice being more observable, less hidden, of openness.

The previous aesthetic was driven by the reverse philosophy, that of protection, that of detachment from the world, of a lack of distraction”

This argument, if taken to its logical conclusion, would require all court buildings to be modified including the Central Court, the Downing Centre and the Darlinghurst Court!

Surely in the case of the Central and Darlinghurst Courts the buildings reflect their contemporary philosophy of justice?

Why then should not the Queens Square complex reflect the philosophy of its time?

All the practical issues could have been achieved without changing the façade.

It is difficult to determine the logic behind the changes but I suspect judicial vanity.

Anecdotally, I understand that those who use the spaces behind the “interventions” are not happy.

Now that panels have been removed, there seems to be a glare issue which means that windows need to have curtains drawn. If true, it would defeat the purpose.

The Law Courts should be appreciated for the visionary design and be considered as architectural heritage.

It can only be hoped that if the building survives another 50 years then the original design may be appreciated and the façade restored to the original.