Tucked away in bushland on Sydney’s north shore, this house was inspired by Japanese architecture and the organic work of Frank Lloyd Wright. 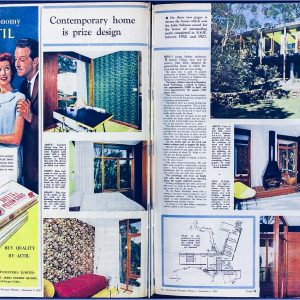 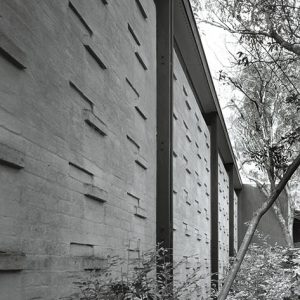 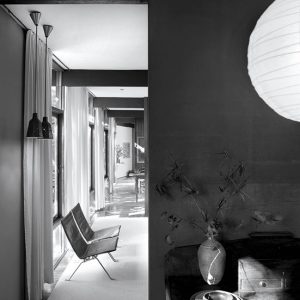 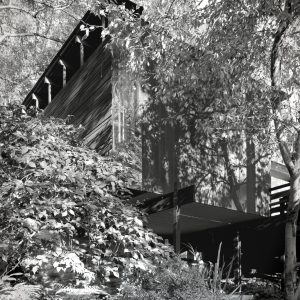 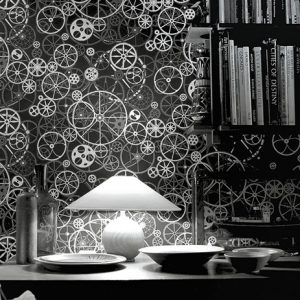 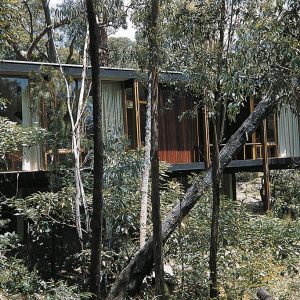 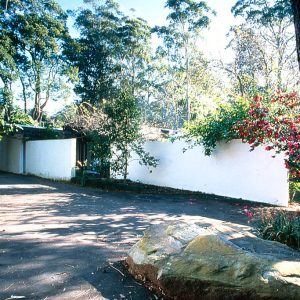 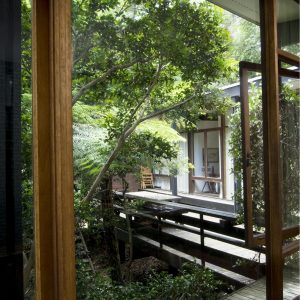 Designed by Russell Callam Jack and John Allen in association with Pamela Jack, the house can barely be seen from the road, located in bushland at the northern edge of Wahroonga, on the outer frill of Ku-ring-gai Chase National Park on the upper north shore of Sydney.

The Jacks purchased it as the last undeveloped block in the street and proceeded to plan for the challenging site which trundled the steep and rocky gorge of eucalypts and with a creek running through it.

The Sulman Award Jury described it:

“The house is framed in timber using twin columns on a 10’ module with beams at floor and roof levels connected with split ring connectors. Brick walls are bagged and painted, stud walls sheeted with red mahogany vertical boards, and all window frames and sashes are oiled maple.” (Sir John Sulman Award, 1957, Architecture in Australia, July/Sept 1958, p.77)

The chairman of the award’s judging panel, GHB McDonnell, described the house as: “… in the best tradition of architecture, but essentially of today, exploiting admirably its hilly site, and the spirit, material and techniques of our people, and a worthy contribution to our domestic architecture”.

Architect Scott Robertson’s notes on his entry on Russell and Pamela Jack for the Encyclopedia of Australian Architecture (2012):

“…the Jacks considered the logical expansion of structure to be very important but also felt a strong need for a richness of embellishment and decoration. Controversially they had feature walls of stock wallpaper, which added a richness to the modernist interior of the house.”

The Jack House was listed as an item of State significance on the NSW Heritage Register in 2013.

The Australian Women’s Weekly, in the 3 September 1958 issue, described the building:

“Two young Sydney architects, Russell Callam Jack and his partner, John Allen, designed the prizewinning house, in which Mr Jack and wife are now living. Mr Jack, who is aged 32, studied architecture at Sydney Technical College. Later he spent 18 months in England and Europe on a travelling scholarship. The house cost approximately £5,500 to build and covers approximately 12½ squares (1250 square feet).

“This contemporary home features simple, clear-cut lines and harmonious integration of textures and materials. Throughout there is a strong feeling that the place is well put together. This is probably due, in part, to the way in which the same timber and brickwork is used both inside and outside the home.”

“…the elevation of the land on which his home stands and the character of the terrain itself were the big factors in the partners’ choice of a plan. The flat-roofed house stretches across a sloping block of land, heavily wooded and covered with rock outcrop. On the garden side are large areas of glass; on the street side the brickwork is topped with window areas for cross ventilation…

Because the aspect is north-easterly, the house gets plenty of sun, light, and air. An eave overhang of about 2 ft helps to control the sun during summer…”

“Like most young homemakers Mr and Mrs Jack wanted a comfortable, inviting home… The furnishings and décor are bright with colour, and there are some charming pieces the couple collected overseas.”

Gary Charles Wolff, “The Sydney school: thesis presented to the Faculty of Architecture of the University of New South Wales in partial fulfilment of the requirements for the degree of Bachelor of Architecture”, Sydney, 1984